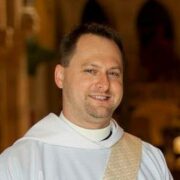 Rev. Sean Slack has been called to be the next rector of St. James.  He will celebrate his first Eucharists with us on June 4th and 5th, 2022.  Sean was born and raised in Bucks County and graduated from New Hope-Solebury High School.  He attended the University of Notre Dame, graduation with a BA in government.  Sean began attending St. James in the late 1990’s.  During that time he served on the vestry, worked with the youth group and completed the 4 year EFM program.  He discerned a call to the ordained ministry.  The people of St. James recommended that Sean pursue is ordained ministry.  Sean attended Episcopal Divinity School in Cambridge, Massachusetts and graduated with a Master of Divinity.

After returning to the Philadelphia area, Sean was ordained to the priesthood at the cathedral in Philadelphia in 2013.  Since then, he has served as Priest in Charge at All Saints, Fallsington and St. Paul’s, Levittown.

Sean is married to Laura Slack.  They have a 7 year old son, Tyndale.

Joanna has been the Parish Administrator at St. James since 2018.

Saint James is currently seeking a new music director/organist. If you or someone you know is interested, please contact the parish office for more details.